Plateau United and Enyimba will represent NPFL in the CAF Champions League next season. The two clubs finished first and second respectively because final league standings were determined using points per game criteria. The 2019/2020 Nigeria Professional Football League season was cancelled at matchday 25 because of Covid-19 pandemic.

It is appropriate for Enyimba to play continental football again. They have been the most consistently good club from Nigeria although Enyimba is more of a CAFCC side nowadays. You can read our analysis on what Nigerian clubs need to do to win CAFCL again.

Treble for the Moroccan #ClubOfTheCentury this season? 😁

Our favorite club in Morocco, 🇲🇦 Raja Casablanca has a tradition of playing beautiful football and have graceful players like Banoun, Hafidi, Moutouali. They have been strong in all competitions this season. pic.twitter.com/8vUeIPo7we

Raja Casablanca cleared the last of their games in hand this week by beating Olympic Safi 2-0. The result saw them overtake Wydad Casablanca as leaders of the Moroccan league. Raja have 39 points to Wydad’s 37 after 20 rounds of league matches. There is still a Casablanca Derby between the two to come on 27th August 2020.

Raja Casablanca could be onto a monumental season if they maintain their great run of form. The Greens not only lead the Botola, they are also in the semifinals of both the CAF Champions League and Arab Club Championship. 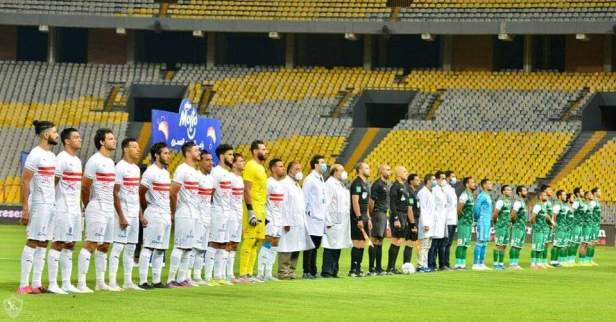 The Egyptian Premier League 2019/2020 season resumed with a Zamalek win over Al Masry on 6th August 2019. Al Ahly has pretty much won the league but the battle between Zamalek and Pyramids FC for the other CAFCL spot will be worth watching. It will be intriguing to see if Al Ahly can maintain their form ahead of the CAFCL semifinals.

Egypt could also potentially host the CAF Champions League 2019/2020 final should both Ahly and Zamalek advance to the final.

4. Fans to be allowed for CAFCL semifinals?

Cairo Stadium Director, Imad Darouich said that up to 25,000 people can be present on the stands for the CAFCL semifinal second leg matches. This will happen if CAF allows Al Ahly and Zamalek to play in front of their fans on the weekend of 2nd and 3rd October.

Imad said that Cairo Stadium will comply with hygiene standards that have been set to prevent spread of Covid-19. Confirmation of presence of fans would make the Egyptian duo favorites to reach the final. Morocco has not given any indication that they would allow fans to attend the semifinal matches.

What? Yes! TP Mazembe’s fans organization gave food provisions to the players in the presence of the media. Foodstuff issued to TPM players included sacks of rice, oil cans and an actual cow. This was a great gesture, especially for the club’s foreign players who have had to stay in DR Congo all through this Covid-19 crisis despite TP Mazembe crashing out of the CAF Champions League.