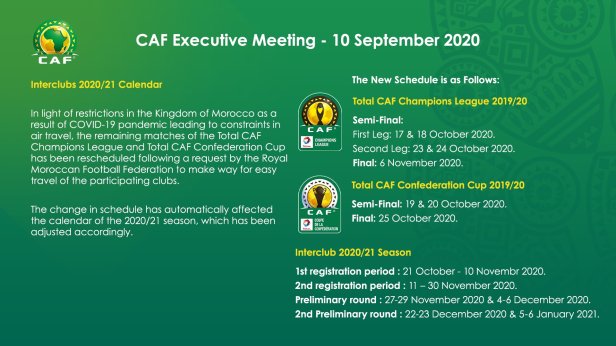 It sucks. I know. CAF gave the excuse of Covid-19 restrictions in Morocco. But let us be real. UEFA managed to complete their Champions League from the Round of 16 and played a successful competition. Why should Africa find scheduling fixtures so hard?

It is not all bad news from CAF. The African football governing body gave a road map on how the Women Champions League will proceed.

It will be an 8-team competition featuring 2 groups of 4 teams. The participants will be determined from qualifiers in each of the six CAF zones. And there will be a host nation. We hope this tournament lifts women’s football in Africa at club level.

Nobody likes seeing coaches fired but when they drop the ball like Ernst Middendorp did with the PSL title this season then you have no choice. Kaizer Chiefs decided to sack Middendorp after he lost the PSL title on the last day to Sundowns. We also believe that it is a good move considering Amakhosi are expected to mount a challenge for the CAFCL trophy this season. They do have a squad that can win it. Question is who will be the next man to lead the team?

4. Youcef Belaili to Return to Africa?

Word on the street is that, baller, Youcef Belaili could be leaving Al Ahli Jeddah to return to African football. Which club can sign him? Esperance Tunis is obviously linked with the winger. Al Ahly, who lost Ramadan Sobhi, are linked to him; so are Zamalek and Pyramids FC. I do like the idea of him playing for Zamalek but he did promise that he would never play in the CAF Champions League for a side that is not Esperance Tunis. It will reportedly cost at least €4 million to get him from the Saudi Arabian club.

Moise Katumbi is the guy who made TP Mazembe relevant again. He used his money and political standing to establish the Lubumbashi side as the stringest Sub-Saharan Africa team in the CAF Champions League. I am sure he appreciates the gratitude of the elective assembly choosing him to continue leading the club. He won 63 out of the 63 votes cast to elect the TP Mazembe President. Other club officials were elected in the Club’s elections.